The Stour Valley list for 2020stands at 102 species so far.
StourValleySightings2020
Please send your sightings to martynwilson@talktalk.net


Well, the month has come to an end with yet another wet and very windy outing courtesy of storm Jorge. Not much of note at Grove Ferry this morning but nice to see one of the Great-white egrets acquiring its breeding plumes. There was a single Shelduck from the Ramp, 14 Mute Swans, 3 Tufted Ducks, 2 Pochard around 60 Teal and the resident white Mallard. At Feast hide along with the Egret were 41 Teal 3 more Tufted Ducks, 3 Greylag Geese and 3 Mallards. It was also nice to watch a pair of Marsh Harriers going about the business of producing next generation Marsh Harriers. Let’s hope the winds abate and March fairs better. 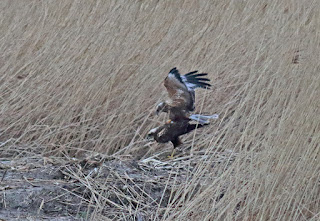 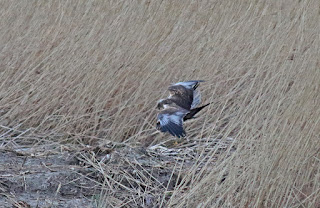 Another uneventful weekend in the vast bird rich expanse of the Stour Valley with 40-60mph winds on both days which kept small birds to a premium. The best of the birding over with in the first hour of light waiting for and watching the Harriers leave roost. There were 15 Marsh Harriers out with the first one up at 06.35 and 3 Hen Harriers out with the adult male out first at 06.42. A display of a fine male Peregrine Falcon hunting the reserve was the highlight of the weekend showing off some of his aerial acrobatics trying to catch Lapwings, without success, before heading of at speed low over the lake in the direction of Canterbury. 300 Greylag Geese came on to the lake with no sign of any ‘wild’ Geese with them and 6 Grey Herons were in the air together over Marsh hide pools. Up to 7 Shelducks were present, 3-400 Shoveler and 250+ Teal with the latter two sheltering behind reeds away from the strong winds, a single drake Wigeon was also present. As usual this year a Sparrowhawk put in an appearance early mornings by Tower hide and anywhere between 1000 and 2500 Cormorants left roost. Some small birds were seen including 4 Stonechats and the usual ‘tame Robins, Chaffinches and Tits that come to feed of hand held seed offered in the Alder Wood. 1 Tawny Owl still present in the woodpecker holed tree. Two male Bullfinches, 1 Water Pipit and 2 Kestrels also made the notebook. With all the nice excavation work carried out by Natural England and the vast amount of resting water present, here’s hoping for a few (lot) of decent wader passage come the spring.


I got very lucky with the Harriers. Three, possibly four male hen and two ringtails, plus upwards of two dozen Marsh Harrier. From where you said by tower hide at about 430pm. Also Barn Owl hunting and being mobbed by crows, heard a Bearded Tit pinging too.  Cheers,

A weekend of two very different halves Saturday started with some early rain but opened to a bright sunny day with a light breeze. Sunday was very wet and squally with strong winds from storm Ciara (not many birds about). As usual we started at the Tower hide to watch the Harriers leave roost and great views looking towards Grove Ferry. Nine Marsh Harriers left roost as did 2 ringtail Hen Harriers, a Sparrowhawk shot past the hide and down the dyke alongside the Lampen Wall and in the distance a Great-white Egret took a short flight over Grove. On the lake were 5 Great-crested Grebes, a drake Wigeon, 3 Tufted Duck, 236 Teal and 364 Shoveler while at least 1200 Cormorants left for the coast just like the seven vestal virgins!! Just one Tawny Owl visible in the Alder Wood but a displaying pair of Goldcrests was nice to see and the tame Robins and Great Tits came to the hand for seed and suet pellets. A brief look at Collard’s revealed just 2 drake Pochards and 1 drake Goldeneye while the cow field had 7 Pied Wagtails and 30 Corn Buntings. At the Ramp at Grove was a single Black-tailed Godwit and a pair of Stonechats.


Lovely weather at the Grove Ferry end this morning with blue sky and a light frost, just spent a couple of hours going to the Marsh hide and back. There was a Great White Egret at the ramp with approx 30 Black Headed Gull and a few Teal and Mallard Dave Feast hide had 6 Gadwall,1 Lapwing and 1 Little Egret. Along the track i saw 3 Bullfinch 6 Reed Bunting 1 Sparrow Hawk,1 Kestrel and 2 Cetti's Warbler. At Marsh hide were 3 Marsh Harrier and 1 Little Grebe. Sunday the 2nd Feb there were 20+ Corn Bunting in the field with the cattle above Collard's and further down the road in a field opposite the Littlebourne turn off were 6 Little Egret. 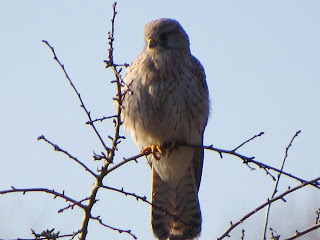 
The first weekend of February added nothing new to the Valley year list which failed to reach the magic 100 species before the end off January although, it came very close with Mark Chidwick adding Long-eared Owl on the 30th making it the 99th bird of the year. Sunday was very quiet with just a Grey Wagtail and 2 Little Egrets of note. A flock of 160-200 Greylag Geese in fields at Middle Drove did not contain any Bean Geese, have they expired (shot) or just moved on? Also there were 2 Tawny Owls in the woodpecker holed tree in the Alder Wood. Saturday was the better with 4 Hen Harriers out of roost including one adult male plus, 11 Marsh Harriers. Also noted were 2 Sparrowhawks, one displaying, 1 Great-white Egret, 460 Shoveler, 200 Teal, 76 Mute Swans, 3 Grey Herons, 1000+ Cormorants and a single Tufted Duck. A Little Egret, 1 Kestrel, 1 Great-spotted Woodpecker, 2 Great-crested Grebes, 37 Lapwing and several Chaffinches were also noted.